Wheeler Road Church of Christ (WRCC), located at 1123 E. Wheeler Street, has had a pantry for more than 21 years. It utilized a small closet that was part of the nursery area. Members supplied the groceries, and as needed, a bulletin message would alert the congregation to what items were running low. Demand for food was inconsistent and sometimes food would languish well beyond its expiration date. Thinking they could better serve those in need, they tried another program, a semi-annual give-away, to let the hungry know about the pantry. Boxes of food were given away along with clothing and household goods. Demand increased, and WRCC looked to increase space for setting up a more organized pantry. The pantry was moved to a space that used to be a “cry room” that was about 5 times larger than the closet. Canvas grocery bags were offered in the atrium that carried a tag naming specific food items. Members of the church would take the bags and purchase the items when they shopped for their own families. The bags would then be returned with the items, and stocked in the pantry. WRCC was seeing a fairly consistent demand for food from their pantry, and needs were being met.

Several years ago, WRCC decided to explore how other pantries operated. In January 2011, WRCC became a member pantry of the Midland County Emergency Food Pantry Network. The advantage to WRCC has been the use of the network screener that is the point of contact for those in need. The church office has limited hours, and having someone to take requests improves their efficiency. Another advantage is the ability to purchase food from the Eastern Michigan Food Bank at a much lower cost. Food is still provided through the congregation with the grocery bag system. The pantry recently moved again to a room across the hall from the church office, again adding more space and shelving. They added a freezer, and hope to add a refrigerator soon. They are open on Wednesdays, and currently serve up to three families per week.

Plans for the future include finding a way to include more church volunteers, and serve more hungry families by converting to a “You-Pick” system like the HELP pantry. WRCC is also experimenting with evening pantry hours. 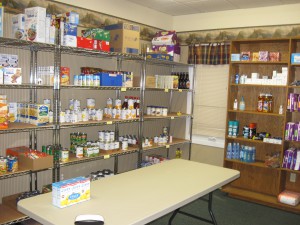 
No identification or proof of income necessary. Please stay in your cars. Maintain social distancing. Registration will be done in your car. Volunteers will put the food into your car. Please be patient as we try to keep everyone safe.


No identification or proof of income necessary. Please stay in your cars. Maintain social distancing. Registration will be done in your car. Volunteers will put the food into your car. Please be patient as we try to keep everyone safe.

The EFPN newsletter is online!

EFPN would like to thank the following businesses, churches and organizations for their donation of food and money to help those in need of food from December 2020 thru March 2022